At Gail Simone’s board, one of the posters (Ed Contradictory- what an alias!) posted this, and my heart stopped.

I edited it to fit here.

And to answer your question…no, it’s not an authentic strip. Someone made it in Photoshop. But it still stopped me cold.

By the way, Gail Simone is one of my favorite people on the planet. Not only is she one of the best comics writers working today, but she also had the stones to call out one of comics biggest dirtbags, the world-famous Rick Olney. You can read the huge thread on her board, or simply read Tony Isabella’s letter to professionals about Olney. Olney owes anywhere between 40 and 100 thousand to freelance artists, but refuses to pay, handing out excuses and insults to those owed. Simone’s efforts led to a community of artists either hurt by Olney or just mad at his actions, and that community has raised money through eBay auctions to help those affected by Olney’s lies. The latest round of auctions includes art from Lea Hernandez, signed art from Isabella, and signed trades from Chuck Dixon and Greg Rucka. Check them out; there’s some nice items, and it’s going to a worthy cause.

TwoMorrows is publishing a book about the greatest inker ever, Joe Sinnott.

I’ve bought a ton of TwoMorrows books over the years, and I’ve never been disappointed. John Morrow and his crew do a fantastic job of covering the history of comics and the lives of the people who make them. John has a special love for Jack “King” Kirby, and Kirby’s best inker (in my opinion) was Joe Sinnott. Sinnott added tremendous polish and pizazz, and humanized the Fantastic Four.

Not only are we getting this book, but we’re finally getting a beautiful reproduction of the best comics in the FF Kirby/Sinnott run. For years, the only color reproduction available was in the FF Masterworks line. Unfortunately, the books that covered the best of their run (issues 41-60) were not very good. The line reproduction was poor, a result of a Masterworks program in flux. Now, to celebrate the release of the second FF movie, Marvel’s releasing the second Fantastic Four Omnibus. We’ve been promised better reproduction. And, it turns out, some of that reproduction is available in the recently released Essential FF Volume 3. If you can’t afford the $100 price tag on the Omnibus, plunk down $12 at Amazon and see the work in brilliant black and white.

You can pre-order the Omnibus at Amazon here: 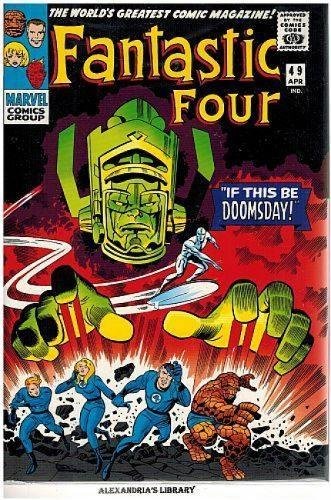 My bum leg felt okay tonight, and my wife needed to shop for her mom’s birthday, so we hit the Monmouth Mall tonight. While walking around, we spotted a store we had never seen before:

…spare uniforms for nurses and cops…

…shoes only a stripper could love…

…and Halloween costumes for the kids!

In an article for the New York Review of Books, critic Daniel Mendelsohn writes about watching the first plane hit the World Trace Center on 9/11:

I flipped the phone shut, looked up, and a dark flash of something darted into the building that loomed directly before me, which was the north tower of the World Trade Center. A gigantic ball of bright orange fire ballooned out of the tower, followed by vast plumes of dense, black smoke. Today, when I tell people this story, I say it was like Vesuvius; there was, indeed, something volcanic about the quality of fire and smoke pouring out of the huge black gash in the building’s side, which directly faced those of us who were looking at it from the north. But at the time, the first, irrational thought that came into my staggered mind was that someone was making a blockbuster disaster movie.

Joe Quesada and Tom Brevoort worked for Marvel on 9/11. Marvel was on the forefront of comic-oriented relief efforts with its Heroes posterbook project and Amazing Spider-Man v2 #36, an issue wholly centered on Peter’s reaction to the destruction of the Twin Towers.

There were initial attempts to somehow incorporate the emotions and patriotic agenda of post-9/11 into Marvel comics, primarily through a run of Captain America comics by John Rey Neiber and John Cassaday. But none of the efforts lasted very long. By the end of 2004, Cap was again fighting his World War II nemesis, The Red Skull (albeit with significant twists). And for a long time, 9/11 wasn’t a major theme in Marvel comics.

This is the only panel we see before Captain America, leader of the anti-Registration forces, surrenders. We don’t get to see the scene as Cap, who’s on the ground, sees it. We actually don’t get a view from the ground until this week’s Civil War: Front Line #11.

Before this week’s issue, many on the intarwub had criticized Cap’s decision to surrender. Cap doesn’t surrender! He’s the guy who beat Hitler back! But now, we see the human cost to the civil war, and Cap’s decision makes more sense.

With this storyline, Marvel has tried to reintroduce the sort of fear, paranoia, and right-minded patriotism that swept America in September and October of 2001. It’s a questionable move, especially since America is really in a post-post-9/11 mood, having kicked out the Republicans out of the House and Senate in last year’s mid-term elections. The conclusion of Civil War (the pro-Registration side wins, heroes that don’t register are imprisoned in another dimension, and superheroes become a sort of auxiliary military across the country) depends on the notion that Americans are willing to surrender personal freedoms in times of great crisis. But this isn’t true anymore in today’s America. Librarians have fought the draconian Patriot Act, and the American public are outraged at the mess that is the Iraqi war. Marvel has now aligned its reality to a paradigm that doesn’t exist in America. I’m curious to see how well it will work.

One image in this week’s Front Line sticks out like a sore thumb:

There’s a jet sticking out of that building. How did this get approved? It’s an image that defies physics. We’ve learned the hard way that when a plane hits a building, the plane doesn’t stick out. I’m baffled by this.

I swear, the next book I talk about is going to have NOTHING to do with Civil War…

By the way, I’d like to publicly thank Joe Quesada for the private note he sent me after the column I wrote about his holiday song in January. It came at a low point for me when I was dealing with my leg injury, and his thoughts were greatly appreciated. He deserves all the success he’s earned at Marvel. One of the reasons I love comics is that most of the writers, artists, and editors that make the comics I love are really good people in real life. Joe is one of the good people.

I admit that part of the fun of having this site powered by WordPress is the ability to change themes on the fly. As much as I liked the old theme, I wanted something a bit more dramatic, and Lisa Sabin-Wilson’s XMark theme seems to take the cake. I need to edit the header and modify a few things, but boy, isn’t this pretty?

Medical update: First, thanks to everyone who wrote publicly and privately wishing me well. I’m in less pain than I was in December and January. I can walk short distances now without discomfort. I had a procedure done last month where a needle filled with medicine was wiggled inside my hip for a half-hour or so. It was really uncomfortable, but it seems to have reduced the inflamation in certain areas of the hip. We’re doing the same procedure again in two weeks, and we’re hoping this minimizes the pain further.

I’m blessed. I have lots of friends who have helped me, including this site’s patron saint, Glenn Walker. And my wife is just awesome. She’s put up with my pain, my insomnia, my inability to do chores, and she has never let me down. People go through a lot worse than this with a lot less help, and I don’t know how they do it.

One weird thing I have to mention: somehow, I lost 40 pounds over the last three months. Now, I’ve made some dietary changes. I stopped drinking soda (I love Vitamin Water!), and I can’t drive to the fast-food joints, so I eat more of my wife’s cooking. But still…40 pounds? I’m still much heavier than I want to be, but I’ve got a start, and when my leg heals, I plan to hire a trainer and start working out. So expect a thinner me soon.

Oh, and comics blogging. I’ve read lots of great comics over the last few months- Eisner’s Spirit Archives, the amazing Popeye book from Fantagraphics, Alison Bechdel’s Fun House, Paul Grist’s Kane, and so much more. I’ll be writing about it all soon. Thanks for waiting. I hope my writing will be worth the wait.